Kansas City, Mo. (Nov. 13, 2019) - Elton John, the number one top-performing solo male artist, announced 24 new concert dates to his sold out Farewell Yellow Brick Road Tour. These new dates complete the second year of the North American leg of Elton’s three-year worldwide tour, counting 43 dates in 2020.  The tour will conclude in 2021 and is promoted by AEG Presents. The Farewell Yellow Brick Road Tour will be making stops across North America including Sprint Center on Wednesday, July 8.

Elton wraps 2019 with one of his most successful years to date. In addition to the incredible success of the tour, Rocketman has drawn commercial success and rave reviews, as has Elton’s memoir, Me, which hit #1 on the New York Times Best Sellers list.

The Farewell Yellow Brick Road Tour marks the superstar’s last-ever tour, the end of half a century on the road for one of pop culture’s most enduring performers. Kicking off to a sold-out crowd on Sept. 8, 2018 in Allentown, PA, the tour has since then received rave reviews in every market. Taking the audience on a magical journey through his career, the show features some of Elton’s most beloved songs from his legendary catalogue including, “Bennie and the Jets,” “Rocket Man,” “Tiny Dancer,” and “Philadelphia Freedom.” Elton’s music has taken him to many places, opened many doors and inspired many passions in his life. The audience will experiences a rare glimpse into Elton’s life and the deeply personal meaning behind some of his greatest hits, with mesmerizing, never before-seen photos and videos shown throughout the show from his incredible 50-year career.

“Elton John is always up for doing things differently, using technology to push the boundaries of storytelling and reach fans in new ways. Last year, Elton's YouTube-supported project "The Cut" gave undiscovered talent the chance to create new music videos for his iconic hits, and now his final farewell tour announcement takes experimentation to the next level – live streaming in VR,” said Vivien Lewit, Global Head of Artist Services at YouTube. “We're honored to deepen our relationship by supporting the exclusive live stream and 'behind the scenes' videos in VR for this special moment in pop music history.” 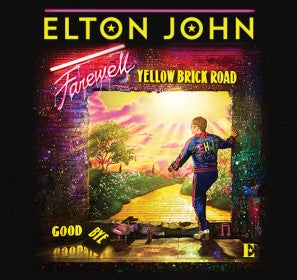